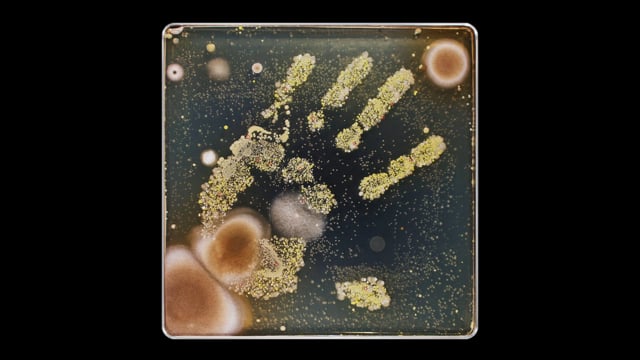 This project investigates the unexpected diversity to be found in the human ecosystem and its 'social network'. It does so by focusing on the language of the billions of bacteria cohabiting it.

Sonja Bäumel tested two subjects. Both of them left hand prints in three specially prepared petri dishes: once after athletic activity, once right after sex, and once fresh out of the shower. Over a period of eight days, Sonja photographed the impressions on an hourly basis to record the development process.

What might these images reveal? Might this become a new tool for a better understanding of how our bodies communicate with the environment?

To make the hidden diversity of this personal ecosystem visible, metabodies focuses our attention on the communication between bacteria. As soon as the bacteria are present in sufficient numbers, exchange of chemical substances takes place among them. When this so-called quorum sensing occurs, organisms created especially for this project begin to glow. A sampling of our skin’s bacterial community, which was transplanted into a fluid culture medium where it can flourish under ideal conditions, provides a completely new way of looking at the bacteria in and on our bodies.

Were we able to observe the language bacteria ‘speak’ through molecules under different conditions? How does this communication change according to the context?

Fifteen bacterial populations of each grown hand print were selected in order to make the (in)visible communication of skin bacteria visible. Here, the focus lies on the human skin bacterial species: Staphylococcus aureus and Staphylococcus epidermidis. These bacteria are known for performing quorum sensing through a peptide and are visualized by using the bacteria Escherichia coli modified with GFP (green fluorescent protein).

In all of our activities, we differ from one another not only genetically, but also bacterially.

University of Applied Sciences Upper Austria, process, Wels, Austria, 2013.
(image 8)
support
Metabodies was on display at the Ars Electronica Center’s exhibition ‘Project Genesis’. The project was selected through an open call “Yours Synthetically”, as part of an EU project called Studiolab; the project was realized during a four week Artist in Residency at the Ars Electronica Future-and Biolab.